While we’re at it, we’re also bringing Mac & Linux versions of Super Time Force Ultra into the wild.

END_OF_DOCUMENT_TOKEN_TO_BE_REPLACED 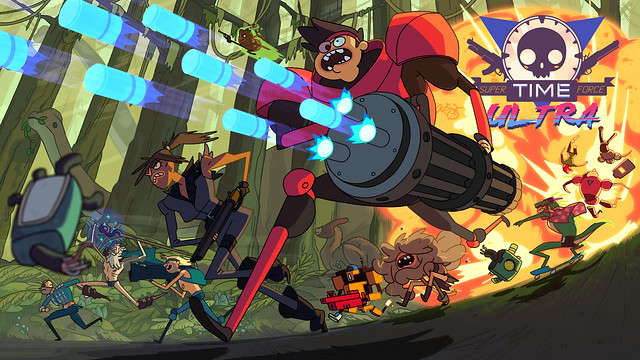 Super Time Force ULTRA is coming to PlayStation 4 & PlayStation Vita on September 1st! That’s NEXT WEEK!!! And not only that, but it’s going to be *FREE* for PS Plus members! And it’s cross-buy! Now you can obliterate Time and/or Space… on yer toilet! Also, in yer bath?

END_OF_DOCUMENT_TOKEN_TO_BE_REPLACED

Happy April 1st, members of the Super Time Force! Today we’re happy to announce that we’ve bent space-time in a way that has allowed us to provide a FREE ULTRA UPDATE for all Xbox One players!

This update brings you the Helladeck, 50 new super fun challenge levels that will force (pun intended) you to use your time-rewinding brain in a different way.

The Ultra update also brings you the Ultra Force mode, an alternate style of time-forcing with extra-powerful, extra-asplosive versions of the Time Force team. But you gotta beat the game before you can wield this Ultra power.

Oh and we added some pretty challenging achievements as well, for all you hunters.

We’d like to thank everyone who has supported our crazy time-traveling platformer on Xbox One. Did we mention this big update is free? Cause it is.

Go forth and Ultra! KOOKABUNGA!

NOTE: This is not an April Fools joke. Trust us. Your Xbox One is probably updating it now!

END_OF_DOCUMENT_TOKEN_TO_BE_REPLACED We’re having a HUGE SALE on ALL THINGS CAPY! GO HAVE FUN PLAYING OUR VIDEO GAMES PLEASE & THANKS!

END_OF_DOCUMENT_TOKEN_TO_BE_REPLACED

Super Time Force Ultra is coming to Steam on August 25th, and it’s bringing along three new friends that should be a little familiar…

We’re ULTRA excited to give Steam players a chance to travel through time with some of their favorite Team Fortress 2 and Left 4 Dead characters! Let’s take a look:

Light’em up! Pyro from Team Fortress 2 dials the heat to 11, then rewinds and dials it to 12. Destroy evil robots with the flare gun, or roast them good with the patented Pyro flame thrower.

She’s got two pistols and an endless supply of propane tanks. Zoey from Left 4 Dead has taken a break from slaying zombies to hop through time with the Super Time Force! Blast baddies with twin handguns, or lob an explosive propane tank their way for maximum ‘splodiness.

When he’s not jumping from planes without a chute, wrastling gators, or beating up hippies, Team Fortress 2’s Saxton Hale tags along as the Super Time Force’s resident brawler/business man. Saxton uses his massive muscles, bare knuckles and self-confidence to smash Blounbot’s into a metal pulp. Then he rewinds and does it again.

All three Valve characters, along with 50 new Helladeck challenge levels and the new Ultra Force power mode are available in Super Time Force Ultra for $14.99 when it launches on Steam August 25th.

Want to see theses new characters, plus the other new STFU features in action? Head over to CAPY’S TWITCH and watch the crew livestream all this amazing stuff later today.

END_OF_DOCUMENT_TOKEN_TO_BE_REPLACED

First, Super Time Force Ultra is coming to Steam this summer! We’ll be bringing STFU to PC players in the not-so-distant future, and while we’re at it, we’re adding some very cool (but presently very secret) stuff to our crazy time-traveling game!

Second, the Super Time Force Soundtrack by 6955 is now available!

Starting RIGHT NOW you can pick up the 53-track album of insanely amazing chiptunes from Super Time Force, by our good friend 6955. Sure, we’re a little biased, but the entire team here at Capy can’t believe how amazing this album turned out. Your ears will thank you.

END_OF_DOCUMENT_TOKEN_TO_BE_REPLACED

We’re very happy to have partnered with the rad folks at Microsoft Studios, 4J Studios and of course, Mojang to bring some of our crazy cast of characters from Super Time Force to the Xbox 360 version of Minecraft as part of the sixth skin pack. Dinosaur in Hawaiian shirt? Check. Two eye-patches? Check. Bare-chested dude named Jef Leppard? Also check. We hope all of you Minecraft players enjoy suiting up as Shieldy Blockerson, Jef Leppard, Jean Rambois, Aimy McKillin, Commander Repeatski or even Zackasaurus. Kookabunga!

Super Time Force is available now! Buy it on Xbox One or Xbox 360.

END_OF_DOCUMENT_TOKEN_TO_BE_REPLACED

Hohokum artist Richard Hogg was kind enough to create this unbelievably slick illustration to commemorate the impending release of SUPER TIME FORCE on May 14th. With his piece, Mr. Hogg chose to highlight Commander Repeatski, the most decorated man in 198X and leader of the Super Time Force.

Follow Richard’s amazing work here, and be sure to check out one of the most beautiful and magical games coming to PS4, Hohokum, releasing this summer.